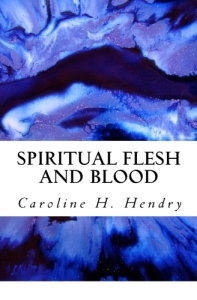 For a limited time, a condensed version of my novel is available for download FOR FREE.  Please click on the link below and download Spiritual Flesh and Blood.

The doctor kept talking but I did not hear any of it. I felt like I could not breathe. I was led into the room where his tiny body lay. There were IV’s and tubes inside him everywhere. His tiny body was covered with a white sheet, only his head was exposed. I slowly rubbed my fingers down his cheek. He was still warm and just looked like he was sleeping only he was a little pale. I carefully removed the tube from his nose and I said, “Shh. It’s okay,” as I did so.

He should be in our home. He should be in his bedroom that was carefully prepared for him with details of his little life already added. On his closet door, there was a picture colored from Gracie of the two of them standing under the sun and blue sky on a field of flowers. His clothes were carefully laid out on his changing table for our day of shopping. He loved to make noises as he pushed little cars wherever he went. He was always carrying a matchbox car with him. Carter had set up a track beside his crib and the two of them would push cars and Carter would race them and Tucker would laugh so admiringly at his big brother. He should be lying in his crib, covered with his favorite blue fuzzy blanket. He should be wearing those cotton baseball jammies that snapped up the front. His hair should be matted down and sticking up on one side. His body should be warm and I would pick him up and put his cheek to mine and sing “Rise and Shine” as we revisited Gracie’s room to wake her up.