(A continuation of a story. If you want to start at the beginning, scroll to Spiritual Flesh and Blood 1)

In high school, Wayne got the highest grades.  His teachers praised him and his peers idolized him.  But Wayne wanted more.

People are told we are animals.  In school across America, kids are taught they are evolved from a monkey.  In many ways this is true.  Wayne was highly educated, highly talented, and dressed and equipped with the finest of what money could buy, but he was just like a more evolved animal.  He was like a pure breed at a dog show that would obediently perform for treats, but he was still an animal.  He did not think for himself; his world was cause and effect.

But something was torturing him.  Something, somewhere was beginning to cause him to think bigger.  What was his purpose?  What was beyond this dog and pony show?  He was at the top of society and his future was bright but there was a nagging hole inside him.

At his high school graduation, Wayne was valedictorian and received honor after honor.  Why was this not enough to satisfy him?  Maybe, although it was expected, he was disappointed after his father was not there.

And with that the angel army charged and the two armies collided for the beginning of a fierce battle in the war of a precious life.  That life was me.  This story is my unseen life, more real than this tangible world we feel and breathe and taste.  This is my story, lasting for eternity.

There is Heaven and there is Hell.  There is a spiritual world that we cannot see.  And there is earth.  It is controlled by the spirits but humans give too much regard to sight.

On the earth, mankind heard the first cries of a new baby.  I was born.  Claire Louisa Parker.  Fully human and claimed by God.  He had sent an angelic army to protect me and to claim me for his own.

But I was blemished I was born with sin.  I was in need of a savior.  There was still a war to be fought.

My parents loved me.  The love of my parents was the first victory Angel Life won.  My mother and father were innocent and they were ignorant.  They loved me and they loved each other.  But they built a weak foundation that could not stand the test of the war that surrounded them.  Their base, their family, was soon to collapse.

Demon Death swung his sword and struck the left shoulder of Angel Life, leaving a great injury.  From this world, my mother collapsed.  Her love and her guidance left me.  Her love had been the stronghold of our family.  Human love and human goodness was not enough.  Our family lacked a firm foundation.  My mother died when I was five and my life would always feel the wound.  Mourning and suffering plagued my childhood home.  Overnight, dark forces settled over our house that was no longer a home.

With the mighty roar of the lion, every knee shall bow and every tongue shall confess that Jesus Christ is Lord.

ISIS will fall on their face and tremble and they will worship the King of all Kings. The UN will bow to the Almighty. The comfortable and rich and those on welfare, Africans, Europeans, the famous in Beverly Hills, all the world will know the Truth and all the Lies will be thought no more. And we will worship.

And then we will be separated. Saved by grace and damned.

And then there will be an account. The saved will stand before God and he will ask, “What did you do with what I gave you?”

We die tomorrow. Live that way.

“I wish it was possible to say something more agreeable, but I must say what I think true.”  CS Lewis

I am a writer, a thinker, a lover. Some quotes make my heart smile. I hear the questions, the objections, and the hurling insults, but there is nothing I wish to add or take away. I read this and I sigh. I read this and I know. I know it is me sometimes. I want to be in agreement. I want to laugh and love and play. But I want truth more. And I am not afraid to disagree.

The good man brings good things out of the good stored up in his heart. Luke 6:45

Thank you Jesus, not only that I am a mom, but that I am Madison’s mom!

I am a writer, a lover, a Friday night dater, a snuggling in front of the fire perfect momenter.  I love those sacred moments in life where my heart and soul go “ahhh” and life is complete and has so much meaning.  I love those moments when I feel inspired and my fingers tingle and my heart sings and my face can’t hold in the smile.  Holidays are the best and opening presents and a home full of yummy groceries.  I cherish Saturday mornings when I’ve woken up first and the house is clean and breakfast is cooking and I am sitting reading a book.  Starting off on the first day of a family vacation, getting a new puppy, that surprise shopping money in the mail, and date night kisses.

But sometimes it is Monday and it is cold and raining and I am driving home to clean a dirty house.  Sometimes I have a doctor appointment.  Quite often I have hurt someone’s feelings or said something mean or started a fight.  I don’t like to sit in that moment of things not being right.  Every now and then I burn dinner, don’t get everything checked off my “to do” list, or get irritated with my husband.  Sometimes I am stuck in traffic and I am running late.  I’ve gained weight, scratched my new shoes, gone over budget, or forgot to pack Madison’s water bottle for school.

Sometimes I am just clocking time.  And when I find myself where I don’t want to be.  I remind myself that I am so thankful to have just that:  this time that I’ve got.  So, I take a deep breath, I apologize, I drive in the rain, I start another load of laundry.  I serve.  I do something for someone else.  I do something to remind myself that it is not all about me and parties and always getting what I want.  I make a list and I clean my house.  I think about the spring time.  I turn on worship music.  I read a verse.  Because if I just show up to work, I’m getting paid by the hour.

Caroline Hendry is published!  Please click on the link below for more information or you can find Beautiful Life with Cancer, Hope During the Hard Times and Spiritual Flesh and Blood on Amazon (Kindle edition available) 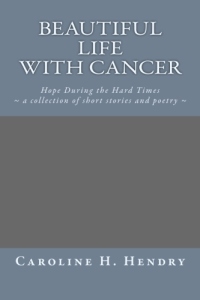 Sometimes vacation is over.  Sometimes there is a big mess to be cleaned up.  There are bills to be paid.  It rains and puddles form and it keeps on pouring.  Sometimes it is cold outside and I forgot my mittens.  Often it is late and I am tired and there are still things to be accomplished.  The laundry is never done.  Always books not read, projects not accomplished, and goals left incomplete.  Slow and dramatic the music plays.

But sometimes my girl and I go on a lunch date with new friends.  We linger and have coffee and gelato.  Then my girl and I head to see the new Annie.  We chat and compare because we have read the book and seen the original movie.  Every now and then there is already dinner cooking in the crockpot.  Sometimes, when things are simple, I see that I’ve got everything I ever wanted.  The movie isn’t over and we are already playing through the happily ever afters.  The beat is a happy melody and merry is my heart.

I AM PUBLISHED!  PLEASE CLICK ON THE LINK BELOW FOR MORE INFORMATION AND TO PURCHASE!